The Time of Singing is Here

Just three pixels by three pixels. Quite simply, these are the smallest flowers on the blockchain. Never has a still life artwork contained fewer bits, and each piece is hauntingly beautiful in its simplicity.

Malaysian Artist Pong grew up surrounded by flowers. When he wasn’t at school, he worked at the family flower nursery in Johor Bahru. It was a long bus journey across town, but as soon as he arrived he could bathe his eyes in the colors. Hibiscus, orchids and ixora. Elephant ears and bougainvillea.

“From an early age it gave me an appreciation of the importance of flowers and the role they play in our lives. They’re symbols of love, of joy, of hope. They are the gifts we give. They are tokens of peace.”

Pong hand picked each of the colors based on these real flowers and then used an algorithm to create 9999 completely unique digital replicas. “Each flower has a different mood”, says Pong, “a different feeling. And so each one is beautiful in its own way”. The process even allowed for the natural mutations and variations that occur in the natural world.

Pong considers himself somewhat of an outsider artist. As a child he drew incessantly, and whilst teachers and friends appreciated his talent, he thinks they never really grasped what he was trying to say with his work. “I used to stick my drawings up on the back wall of the classroom. I enjoyed the feeling of everyone looking, but my work was probably a bit too weird for them.”

When faced with a choice between art college and a computer higher diploma, Pong felt his arm twisted by the financial realities of his family. “We weren’t rich, and at that point, I couldn’t afford to follow my dreams.” But after many years working in IT and web design, lockdown presented Pong with an opportunity to reset. He saw the opportunity to get back in touch with his creativity.

“In response to all the darkness we seem to be seeing in the world, I wanted to create a symbol of love. My hope is that these flowers will now be shared, spreading that joy and building a community around them. More than just achieving something beautiful, both in conception and execution, my broader aspiration is to create meaningful art.”

Despite existing outside the art establishment, the project caught the eye of collector Gabriel Santos, and it struck a chord. Santos first met Pong over a year ago, when the two found themselves bidding for some of the first ever tweets on Cent. Despite meeting in a commercial environment, their relationship has blossomed into a creative one.

An illuminating tweet from Santos reads, “I buy art I believe in, I do not follow the market or the masses”, and never was that more true than in the case of his support for Pong. “It took a few days for the real beauty and meaning of the project to sink in”, says Santos, “but then I clearly saw that it had a very powerful draw. It’s everything that lies behind the artwork that makes the project resonate. These are the kind of meaningful pieces that deserve to be shared internationally, to be shown at Christie’s.”

As John Maeda says, “simplicity is about subtracting the obvious, and adding the meaningful.” When Andy Warhol mechanized the natural world with his screen printed ‘Flowers’ series, it was the tension between nature and mass produced, mechanical art that made the series so compelling. He had used a manmade process to simplify complex organisms down to their most basic shapes.

Now, taking a step on from this, Pong has digitized flowers to create his own abstract pop art. In doing so, he has taken the process of simplification to its logical extreme. Stripping out everything unnecessary, so we’re left with the pure symbol. Undeniably traditional, yet unmistakably digital.

As we speak about the project, Pong tells me that a single line from the Song of Solomon kept repeating in his mind: “Flowers appear on the Earth; the time of singing is here, the voice of doves is heard in our land.” I find myself repeating the same sentence in the days following our conversation. It’s a perfect encapsulation of the series. However dark things may seem as we scroll through the news, however many new fears seem to lurk in the uncertain future, there are also people like Pong out there finding new ways to spread peace. And doing so in the most beautiful way possible.

Simply by sharing flowers. Symbols of love, as old as Solomon and as young as the blockchain, both timeless and yet somehow transmitted to us from the future. 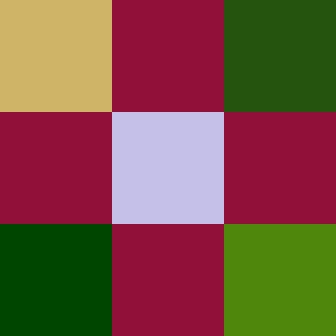